What this entire presentation — How The Monkees Changed Television with Rosanne Welch, PhD (Complete Presentation and Q&A) [Video] (45:06) 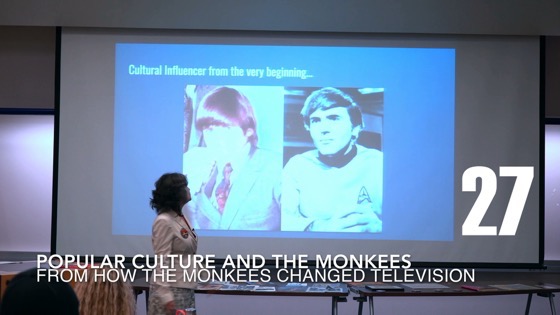 Rosanne Welch, PhD, Author of Why The Monkees Matter, presents “How The Monkees Changed Television” at a Cal State Fullerton Lunch Lecture on May 8, 2018.

In this talk, she shows how The Monkees, and specifically their presence on television, set the stage for large changes to come in the late 1960s.

Identity construction was a mess for these guys and it really I think was sad cuz now we’re a little better. We understand Jim Parsons is not just Sheldon. He’s now on Broadway in the Boys in the Band. He did act of God which toured here in California. We understand he’s an actor he can play other parts right? Now because there was this idea that they weren’t very important and they disappeared I like to show how culturally connected they were. It is proven in a memo from Gene Roddenberry that when Star Trek went for the second season and they’re gonna have Walter Koenig play Chekov he wrote I need him to have a haircut that matches that guy on the Monkees because that’s what girls want right now and they literally planned that his character should be connecting with the girls who like the Monkees and Star Trek obviously culturally kind of important a little bit. Of course back in the day they were part of commercials because everybody is part of commercials. you go to YouTube you’ll see their their Nerf ball commercial and then they have a Schick razor commercial. They did everything but this was at the end of the show often.

Capitalizing on the show’s success, the actual band formed by the actors, at their peak, sold more albums than The Beatles and The Rolling Stones combined, and set the stage for other musical TV characters from The Partridge Family to Hannah Montana. In the late 1980s, the Monkees began a series of reunion tours that continued into their 50th anniversary.

This book tells the story of The Monkees and how the show changed television, introducing a new generation to the fourth-wall-breaking slapstick created by Laurel and Hardy and the Marx Brothers.

Its creators contributed to the innovative film and television of 1970s with projects like Bob & Carol & Ted & Alice, The Mary Tyler Moore Show, Laugh-In and Welcome Back, Kotter. Immense profits from the show, its music and its merchandising funded the producers’ move into films such as Head, Easy Riderand Five Easy Pieces.

Want to use “Why The Monkees Matter” in your classroom?